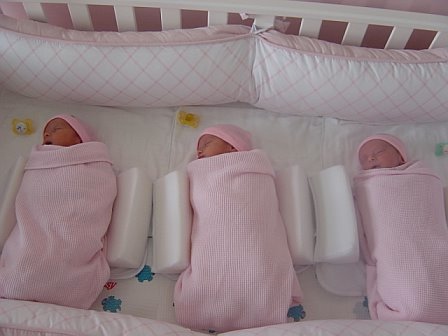 ‘Part Two’ in our Grandparents of Triplets Series 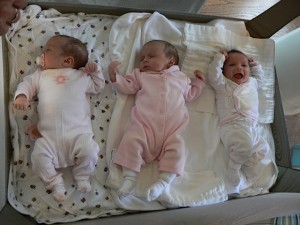 Bringing home any new baby is really quite a feat, but three babies at once is an amazing experience. Once the triplets were born, a team of family members and friends began bringing supplies into the house to prepare for the homecoming. One room was set up as the bedroom with three little cribs with identical pink polka dot bedding. Another room was set up with changing tables and little dressers. There were bookcases and cupboards assembled and filled. So many people lent their used strollers, buggies, bouncy chairs and more. Three of everything filled the house. There was barely room to move. Everything was labeled so they could be returned to their original owners.

And then the babies were brought home. They looked so tiny in their individual cribs that the parents decided to put them all in one bed. Side by side, packed like burritos, the babies rested contently, listening to their sister’s breathing. And just as quickly, listening to their sister’s crying! They were absolutely identical. There was no way other than by reading their little ankle bracelets to tell them apart. Only much later did their individual personalities begin to emerge.

The triplets’ mom Liza had read many articles on dealing with “multiples” and she had decided to use a “military” strategy. Everyone would get fed, changed and bathed at the same time. Thankfully, that meant they would rest at the same time too. Imagine three babies howling at once to be fed. Although breast-feeding had been considered, that quickly proved to be a pipe dream. Three bottles had to be prepared, warmed and delivered. One baby got held for a few minutes and the others had bottles propped up or had family and friends assisting at mealtime.

Liza had a notebook for each of the girls and would meticulously note each feeding, each changing (and what was produced), who had gotten her vitamins and who had been bathed. It would not have been possible to remember without these three books. It wasn’t long before she added notes about “tummy time”. She carefully noted who began holding things in their hands and who had discovered how to pull at her sister and make her cry. Each day was filled with hope that they would sleep through the night, but that didn’t happen for about 4 months!

And you can’t imagine the piles of laundry! I don’t think the machines ever stopped during that first year. Sheets, towels, bibs and an assortment of baby clothes made the house filled with the delicious aroma of DREFT. Far better than the smell of multiple diaper pails! And when I went to the local baby store to inquire about buying boxes of diapers and formula by the dozens because there were triplets, I was politely told that “multiples” were no longer a big deal. Too many families had them, so they would not even consider giving them discounts. In fact, I was told that there probably would not be very many classrooms in any school that did not have a “multiple” in it. So much for sympathy for this extra detail!

They grew quickly and now each set of grandparents could start taking one baby to their house. How easy it felt to care for only one child at a time. We loved the time devoted to just hugging and snuggling and feeding. The interesting thing was that after a short time, we missed the connection of the three of them. There was a very special aura when they were all in the room together. But having grandparents share some of the nights and some of the day-to-day responsibility was a big help to Liza and Scott. It gave them time to breathe and time to rediscover each other…even for a moment!

They learned to sit-up, crawl and eat solid foods. They seemed to do everything within two weeks of each other. There was no one leader. They took turns with the various developmental steps. Nothing seemed to be more strenuous than when they learned to crawl and were off in three different directions at once. There were never enough eyes in the house to watch them explore! There were never enough hands in the house to keep them out of mischief!

*Arlene Michlin Bronstein is the author of a number of cookbooks, including Carlos: Contemporary French Cuisine.  She wrote the book My Word is My Bond, using interviews of 21 traders from the Chicago Board of Trade.  Using that material, she was the Executive Producer of a documentary by that same name for PBS. Her first children’s book, How Did Nonnie Get to Heaven has just been released. Arlene has been married for 42 years. She and her husband Keith have 3 children and 4 grandchildren. 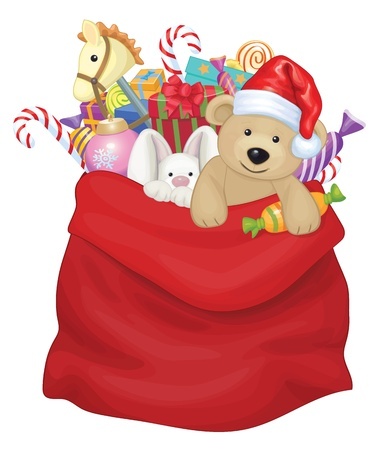 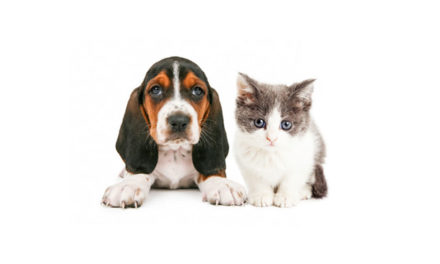 Human Foods that are Dangerous for Dogs and Cats 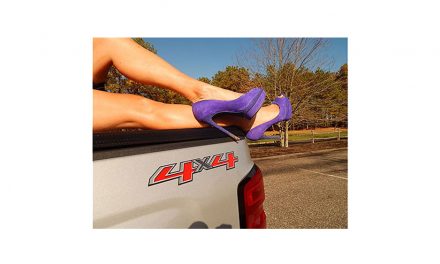